How Houston Neighborhoods Got Their Names 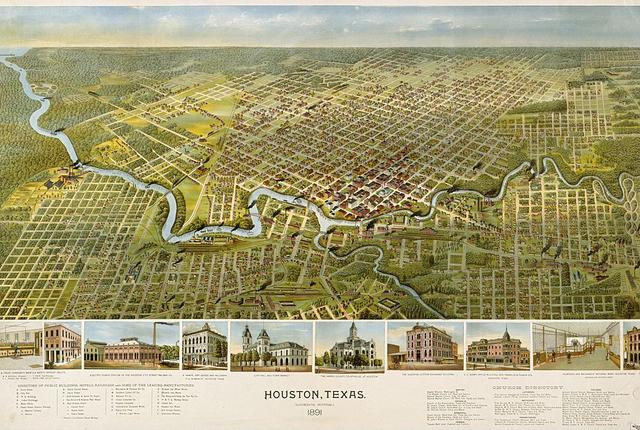 Sugarland is an obvious one but have you ever wondered why the Heights are the Heights or Pearland and Tanglewood? Thanks to Mentalfloss.com, we now know how the most known Houston neighborhoods got their names.

Here’s a few interesting ones.

In 1872, the Santa Fe Railroad hired Alvin Morgan to supervise its cattle operations in the area, and he built the community’s first house. The town originally was called Morgan, but Texas already had a Morgan, so Alvin was the next best thing.

After John Kirby Allen and Augustus Chapman Allen founded Houston in 1836, they divided it into four geographic territories called wards. These wards were divided without regard to population, using geographic boundaries such as streets and the bayou. The first four wards intersected at Congress Street and Main Street. As Houston’s population grew, the Fifth Wardwas carved out of parts of the First and Second in 1866, and the Sixth Ward was created a decade later from a cut of the Fourth. Each ward elected two aldermen, with the mayor receiving votes citywide. The ward system was abolished in 1915, but that hasn’t stopped members of the community, including the Geto Boys, from using the designations.

The Heights is 23 feet higher than downtown.

There are two theories: Either Katy was named for the Missouri, Kansas and Texas Railroad, which was called the KT by railroad officials, or it was named for a barkeeper’s wife. Which theory you choose to believe probably says something about you.

In 1995, the City of Houston established the Midtown Tax Increment Reinvestment Zone. The area is located between downtown and the Museum District, and before revitalization it showed serious signs of urban blight. The name “Midtown” was no doubt seen as a better lure for young urban professionals than “that sketchy area around the Greyhound station.”

This community was originally established as Mark Belt in 1893, but within a year the name was changed to account for the pear trees in the region (which was probably a good call).

Speaking of the Rice family, its most famous son was William Marshall Rice, a Massachusetts-born businessman who endowed Rice University in 1891 before being murdered nine years later in New York City by his butler and attorney. His ashes are underneath a statue on the campus, and the adjacent neighborhood also bears his name.

Tanglewood was developed by William Giddings Farrington. Nathaniel Hawthorne’sTanglewood Tales for Boys and Girls was one of his daughter’s favorite books.

Originally called Peck, Tomball was renamed in honor of Thomas Henry Ball, a big supporter of the Houston Ship Channel. In 1914, Ball ran for governor on the Prohibitionist ticket, but his quest was sidelined by his opponent who hired people to take photos of him in saloons and turned Woodrow Wilson’s endorsement of Ball into Washington interfering in Texas.

In 1972, the Mitchell Energy & Development Corporation created this community among the pines north of Houston. The area had been the site of timber mills for years.

Running out of milk but the baby is teething? Need to borrow a pressure washer? Wish someone would walk your dog just for a day

Face Mask Maskne 101: Prevention for Children, Toddlers, and Teenagers. In the wake of COVID-19, wearing a face mask or cloth face covering is one

Welcome to Houston Family Magazine! We are Houston’s Top Parenting Magazine. Our mission is to Educate, Entertain, and Empower all parents through excellence in editorial; we deliver essential information with enthusiasm and energy to engage with local parents for meaningful experiences. We invite you to join our family. Enjoy the December Issue!