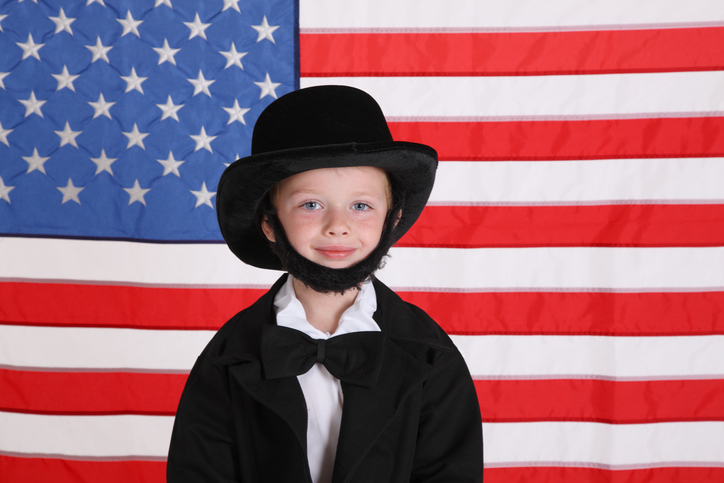 by Lisa A. Beach

Do parenting and patriotism mix? They do if you’re the founding (or former) of our Country, from George Washington right up to our most recent First Dad, President Obama. With their double role as leaders of our country and leaders of their family, the U.S. Presidents bring a unique perspective to parenting and family matters.
But the same traits that helped them guide the nation—leadership, tenacity, loyalty, diligence—were both a help and a hindrance when it came to raising their children. While most parents wrestle with the work-family conflict, the complexity of the presidency takes this struggle to a whole new level. While some First Dads approached their dual role of leader/father with equal levels of devotion, others let their Presidential concerns consume them, making them absentee fathers in the process.

As author Joshua Kendall points out in his book First Dads: Parenting and Politics from George Washington to Barack Obama, most presidents have consistently put work over family. “After all, a single-minded focus on one’s career is the most direct path to 1600 Pennsylvania Avenue,” writes Kendall, whose book bridges the connection between the presidents’ parenting styles and their effectiveness in the Oval Office. So, let’s break it down. What parenting lessons can we learn from our forefathers?

Lesson #1: Childhood is fleeting, so let kids be kids and cherish your time together.

In White House Kids: The Perks, Pleasures, Problems, and Pratfalls of the Presidents’ Children, author Joe Rhatigan reveals the prankster side of Lincoln’s boys. One time, Tad and Willie pulled all the bell cords in the White House, simultaneously summoning the servants, Cabinet members and secretaries and creating a state-of-the-union frenzy in the process. Another time, the boys created a huge mess with paint supplies brought in by an artist commissioned to paint a presidential portrait. No one recalls any resulting punishment from the boys’ misdeeds. Not much of a disciplinarian, Lincoln allowed Tad to interrupt important meetings and even canceled war counsels with generals when Tad wanted to go for a carriage ride.
“It is my pleasure that my children are free, happy, and unrestricted by parental tyranny,” explained Lincoln.
With heavy political matters weighing on Lincoln’s mind, playing with his children provided him with a great sense of relaxation, whether they were roughhousing on the floor or playing catch outside.
Since firstborn Robert would be the only Lincoln child to live to adulthood, the president’s enjoy-your-kids-while-you-can philosophy served him well.

Lesson #2: Both men and women can be nurturing, hands-on parents.

Rutherford B. Hayes (19th President, 7 sons, 1 daughter)
With a large family to fill the White House, Rutherford B. Hayes brought a lively, informal vibe to his tenure as commander-in-chief. And, unlike most men of his time, Hayes took a very hands-on role caring for his eight children (three of whom died in infancy).
Hayes softer side likely stems from his fatherless childhood. After the sudden death of his 35-year-old father just months before the future president was born, Hayes’ mother and older sister raised him in a warm and loving environment. This nurtured upbringing spilled over into Hayes’ adulthood, as he led the nation—and his family—in a calm, comforting manner. Whether caring for wounded soldiers fresh off the battlefield or nursing his sick children back to health, Hayes’ knew how to calm and comfort others.
Never one to delegate his fatherly duties, Hayes made being there for his kids a welcome priority. As proof of his hands-on approach, Kendall cites how Hayes chaperoned his young son’s birthday party and took a week off to help his older son settle in as a college freshman.
In a letter to his son, Webb, he passed on this fatherly advice, “Do not let your bachelor ways crystallize so that you can’t soften them when you come to have a wife and a family of your own.”
Our 19th president, a softie. Who knew?

Lesson #3: Provide plenty of love balanced by structure and discipline.

Barack Obama (44th President, 2 daughters)
The quintessential modern day parent, Barack Obama takes an authoritative approach to raising his family. He’s calm, steady, nurturing, attentive, deliberate, loving and firm.
“We’re a strong believer in structure and rules, and unconditional love but being pretty firm, too,” explained Obama at a September 11, 2015, town hall meeting held with service members at Ft. Meade.
Obama points out that he and Michelle implemented structure and discipline when their two daughters, Sasha and Malia, were very young, especially when it came to common issues all parents deal with—bedtime, watching TV and eating their vegetables.
“If you start early enough with high expectations, I think kids do well with that,” Obama advised. “Part of that involves loving those kids to death but also letting them know, ‘I’m your parent, I’m not your best friend. I’m not that interested in what your friends are doing. This is what you’re doing in our house. When you leave here, you’ll be able to make your own decisions, but we’re trying to prepare you so that you’ve got some sense when you get out of here.’”
Obama also stressed the importance of sharing family meals together as a way to connect.
“As much as possible, when we’re home, they have to sit down and eat dinner with us. I’m a big believer in not getting the TV trays out and watching the Kardashians,” said Obama. “You sit down, leave your cell phones somewhere else and we’ll have a conversation.”
Whether they’re leading the nation or leading their families, the U.S. Presidents, through both their strengths and their weakness, can teach us a few lessons about what it means to be a good parent.

Note: This article originally appeared on www.Parent.co and has been excerpted and republished here with permission. By Lisa A. Beach. Lisa Beach is a freelance journalist, copywriter, humor blogger, and recovering homeschool mom who lived to write about it. Check out her writer’s website at www.LisaBeachWrites.com and visit her humor blog at www.TweeniorMoments.com.

PrevPreviousKids Bored? Busy Projects with a Purpose
NextHow our Friday Night Pizza Night Helps us Connect With Our Growing KidsNext
YOU MAY ALSO LIKE