Shine by Patrick McDonnell
(Little Brown Books for Young Readers May 2017)
Little Hoshi is a sea star who lives in the ocean. She wants to shine and live among the colorful and unique creatures near the surface, but finds herself near the ocean floor instead. When an anglerfish comes by and lights the area, Little Hoshi learns that she can shine wherever she is. A lovely quiet book for families to share.

Lily’s Cat Mask by Jill Fortenberry
(Viking Books For Young Readers, May 2017)
When Lily and her dad go to the store, he buys her a cat mask. Lily likes to wear it everywhere and all the time. When she gets to school, that’s a bit of a problem, and sometimes the mask has to sit in the teacher’s desk. A charming school story for all readers.

Prince & Pirate by Charlotte Gunnufson
(G.P.Putnam Sons Books For Young Readers, May 2017)
Prince and Pirate are two fish who live in their own fishbowls until they’re both moved into an aquarium. Neither one has any interest in sharing the space with the other. When a shy dogfish enters the tank, Prince and Pirate put aside their differences to make him feel welcome. A cute picture book that reminds readers of the value of sharing.

Escargot by Dashka Slater
(FSG Books for Young Readers, April 2017)
Escargot is an adorable French snail trying to reach the salad at the end of the book. He admires himself and his shiny trail as he moves across the table to the salad. He hopes it has no carrots, because he really does not like carrots. Fun illustrations and a charming story make this an accessible book for new readers.

H is for Howdy by Eva Freeburn & Lawson Gow
(Bright Sky Press, October 2016)
A new Texas alphabet book is ready to be enjoyed by young Texans. Houstonians Freeburn and Gow have searched for the best words to describe our unique culture and they do it with style and humor!

Toad On The Road by Stephen Shaskan
(Harper Collins Children’s Books, May 2017)
There’s a toad on the road, hanging out and causing problems. He blocks a bear on a bike and a croc in a car and many other animals. A great rhyming story with plenty of opportunities for multiple readers to chime in.

The Star Thief by Lindsey Becker
(Little, Brown Books for Young Readers, April 2017)
Honorine’s life as a maid at Vidalia mansion is fairly boring, at least until she finds sailors ransacking Lord Vidalia’s study and then follows a winged girl into the night. She finds herself in the middle of a battle between sailors and constellations come to life. Part steam punk, park Peter Pan and all adventure, this is a great story for middle grade readers.

Beyond The Bright Sea by Lauren Wolk
(Dutton Children’s Books, May 2017)
When she was just hours old, Crow was put in a small boat and cast away, drifting all alone until she landed on a small island. When she grew older, she named the man who saved her Osh, and he named her Crow, and they have been a family ever since. Crow is content with life on her island with Osh and Miss Maggie, their neighbor, but she has always wondered where she came from. Why do the other islanders fear her? Why does Osh refuse to leave the island? Who put her on that boat and set her adrift at the mercy of the sea? After she turns twelve, she begins finding pieces to the puzzle of who she once was and who she is now, which may be the same, or entirely different. This is a gorgeous story of identity, family, and what those things truly mean.

Me & Marvin Gardens by Amy Sarig King
(Arthur A Levine Books, January 2017)
Eleven-year-old Obe Devlin lives on the last three acres of family farmland, land that has been mortgaged over the past 100 years and is now being developed. He spends his time avoiding math homework, identifying animal tracks, and cleaning the part of the creek that separates his family’s property from the new housing subdivisions. When he discovers a frightening-looking—but friendly—creature who eats only plastic, Obe’s first inclination is to keep it secret. But to keep both his new friend and the environment safe, Obe is going to have to confide in someone.

Grendel’s Guide To Love And War by A.E. Kaplan
(Knopf Books for Young Readers, April, 2017)
Tom Grendel lives a quiet life in a senior citizens community, with his dad, an Iraqi war vet. He spends his days writing in his notebooks and mowing the lawns for his neighbors. When a new family moves in next door, Grendel recognizes Willow, the girl he’s long had a crush on. Her brother Rex begins throwing raucous parties every night that trigger the PTSD of Grendel’s dad, so it’s up to Grendel to figure out how to get rid of Rex and his friends. Great characters, from Grendel and his friends to his geriatric neighbors, enhance this well-written realistic novel that has clever references to Beowulf.

Windfall by Jennifer Smith
(Delacorte Press, May 2017)
What would you do if you won the lottery? When Alice buys her best friend Teddy a lottery ticket and he wins the Powerball, that’s exactly what they must confront. Teddy, whose father abandoned his family due to a gambling addiction, thinks all his wishes have come true. Alice, who lost both her parents when she was nine years old, knows that the money will come with strings — and problems. These two teens navigate the new world of the wealthy as well as their relationship as they explore love, loss, and all that comes between. A beautifully written novel, perfect for a summer read!

The Hate U Give by Angie Thomas
(March 2017)
Teenaged Starr Carter rotates between two worlds — the poor, black neighborhood where she lives, and the rich, white high school she attends — and she is acutely aware of how she changes as she passes between them. When her childhood best friend, Khalil, is murdered by a policeman before her eyes, Starr becomes a witness to a crime that headlines national news and throws her neighborhood and her double life into turmoil. As Starr confronts injustice with the law, she also challenges it in her social life, bravely becoming a heroine whose greatest strength is her voice.

PrevPrevious7 Ways Women Can Prevent a Stroke
NextSpina Bifida: What a Difference a Year Can MakeNext
YOU MAY ALSO LIKE 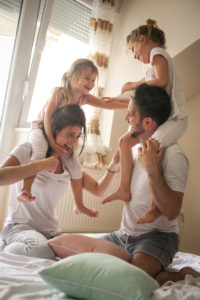 Eight really fun and unique kids’ activities that will provide hours (sometimes days) of fun for the whole family! Make-A-Fort- It’s brand new and the perfect

How to get a pay rise in 2021. It’s fair to say this year probably isn’t the best when it comes to negotiating a pay

5 Easy Steps to Shift Your Family Towards a More Plant-Centered Diet . Plant-based diets have long been known to promote health. They are associated