A Delightful Show of Mystery, Intrigue, and Laughs 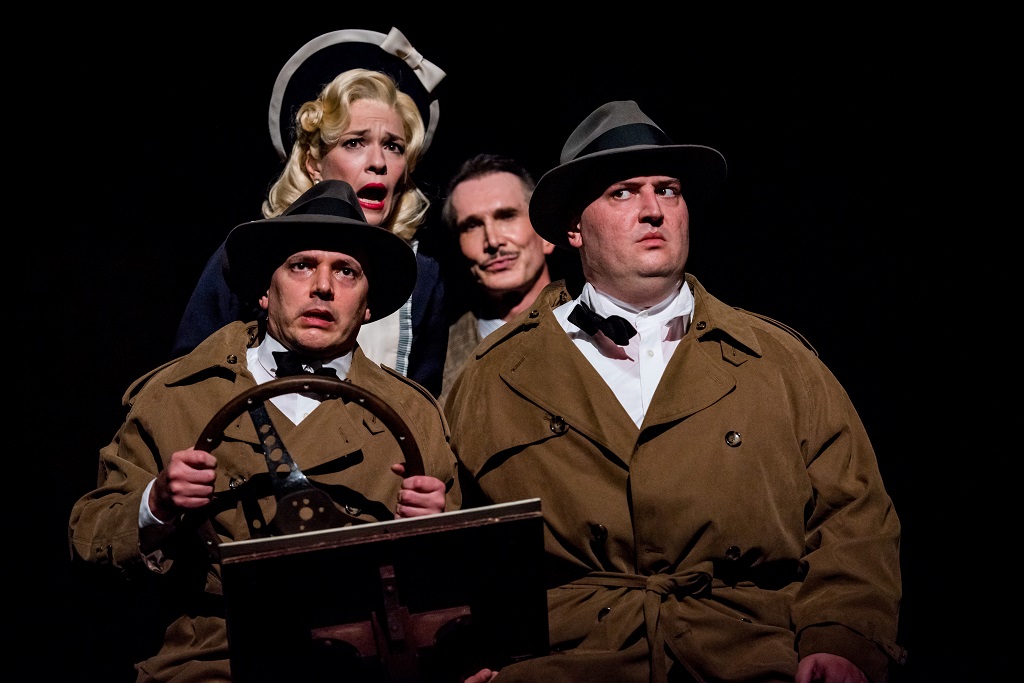 I took my daughter to see the matinee performance of the Alley Theatre’s “Alfred Hitchcock’s The 39 Steps.”  The show is based on Hitchcock’s 1935 “39 Steps” film. I was admittedly unsure of how a 12-year-old would respond to a comedy thriller with a complex plot woven intricately together with clever wordplay, a sharp contrast to the shallow-plotted, laugh- track-prompted tv shows she’s accustomed to watching.

We were both in for a pleasant surprise. “39 Steps” was comedic, clever, and compelling. Not only was the script clever, a delightful string of witty dialogues, expertly delivered by the cast, but also the means by which this cast of four actors were costumed and scripted to transform in and out of the story in the form of 150 characters was absolutely genius. The transitions tickled the audience with uproars of laughter and awe, the kind that prompts one to look about to fellow audience members with shared gasps of appreciation.

The play tells the story of an ordinary, somewhat bored man, who meets a mysterious woman at the theatre. It turns out the woman is a spy, and she’s murdered in the man’s home, but not before warning him about “The 39 Steps.” From here, the plot takes off with our hero becoming the target of a nationwide manhunt and culminating in an ultra-climactic, death-defying finale.  The actors do an uncanny job of keeping up with a dizzying pace, a broad range of eccentric characters and a corresponding variety of accents, and of embracing some unusually innovative stagecraft to make the story come alive with suspense and intrigue.

Frequently throughout the production, I was reminded of “The Carol Burnett Show,” a variety show I watched as  kid, in which a similarly concise cast pulled off hilarious spoofs of such Hollywood classics as “Gone With the Wind” and “Mildred Pierce.” I draw this parallel as the biggest of compliments to the cast and crew of “39 Steps.” Carol Burnett, Tim Conway, Harvey Korman, and Vicki Lawrence did an exquisite job of producing rich, entertaining characters, and the “39 Steps” cast (Todd Waite, Elizabeth Bunch, Bruce Warren, and Mark Price) did the same with an extra-polished finish, and while managing to not erupt in laughter mid-scene–an impressive feat given how funny all the characters were written and the comedic talent of the cast in delivering these characters with side-splitting prowess.

In short, if you feel up for an evening (or afternoon) of mystery and laughs, take the family to see “Alfred Hitchock’s 39 Steps” at the Alley Theatre.  The show’s run has been extended through September 3, 2017, due to popular demand, and it’s easy to see why.

PrevPreviousAt SafeSplash, We Understand… Swimming is a Life Skill®
NextSAT, PSAT in your future? Here Are a Few TipsNext
YOU MAY ALSO LIKE