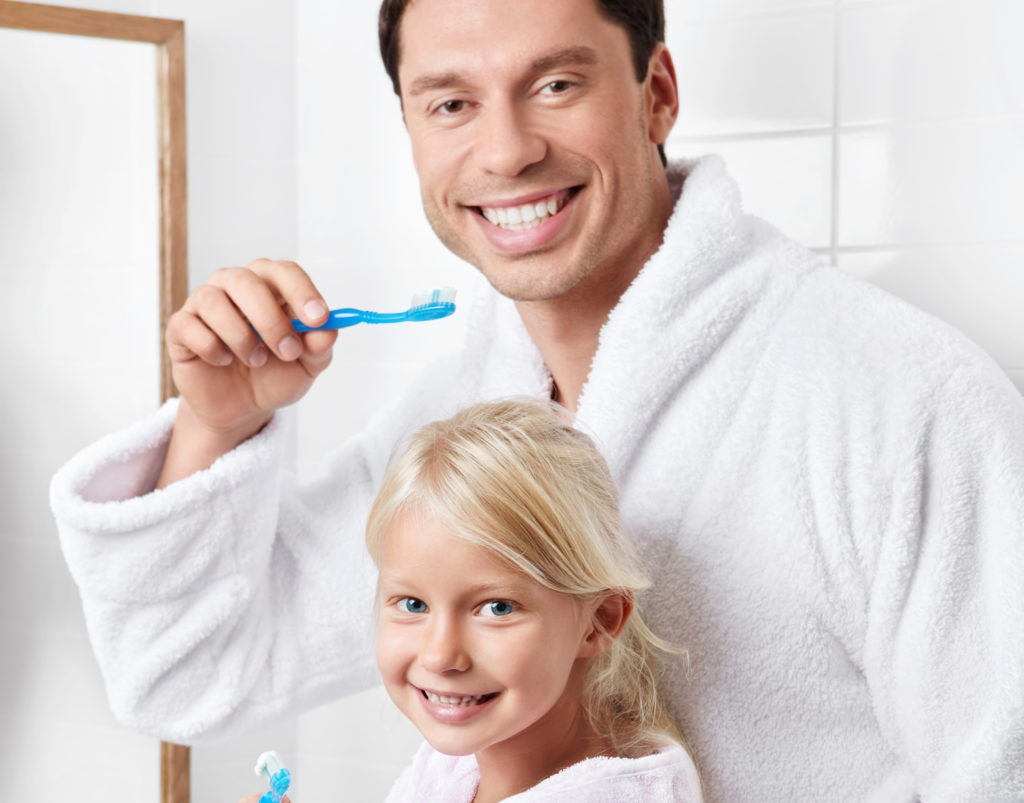 by Patrick and J.L. Hempfing

My daughter, Jessie, loves to try new things and when she does, she wants me to try them with her. I’ll admit change is not one of my strengths. As I get older, change gets even harder. I probably would have titled this column, “Dad and Change Don’t Always Get Along,” but instead rolled with my coauthor Jessie’s title suggestion.

Let’s get her side of the story before my rebuttal, which I’ll need for this one.

Dad has gone crazy! Recently, we purchased a two-pack of electric toothbrushes. I read the directions, and then began using my new toothbrush. I convinced Daddy to try his. I showed him how you use it, and he began. After about 3 seconds, Dad turned the power level down to the lowest it could go. Then he began mumbling, “I hate this.  I hate this.” With the toothbrush in his mouth though, it sounded more like, “I ate is.  I ate is.”

Momma also convinced him to try a Waterpik she had purchased. To put it simply, same reaction. It has been a little over a week since then, and he is still complaining he has a toothache. He says he got it because his ears heard a sound like a drill, and it wasn’t time for his quarterly dentist visit. Anyway, I have a crazy dad. Now let’s hear his side of the story.

Jessie’s narrative is accurate, except for the “crazy dad” part. My wife, Mattie, witnessed it, too. I can sum my thoughts up in ten words, Give me my manual toothbrush and pack of dental floss. I can take care of my teeth the old-fashioned way. Aside from the noise, I didn’t like the spinning brush scraping my gum lines.

Several weeks have passed since my bathroom drama, and I haven’t retried the electric toothbrush and Waterpik. Though I promised Jessie I would try it again one day, I didn’t say when.

Having two crowned molars, one of them that’s sensitive on occasion, my goal is to avoid root canals. Why stress out my tooth nerves (or my mental nerves) with a toothbrush that sounds like a drill, when I can care for my teeth quietly?

My Waterpik experience didn’t go any better than Jessie’s description of the oscillating toothbrush. Like the electric toothbrush, it made noise. Furthermore, I don’t need a stream of water with the pressure of a fire hose spewing into my mouth. Water sprayed everywhere, including the bathroom mirror. A busy dad shouldn’t have to clean the bathroom and put on a dry shirt as part of his oral hygiene routine. Okay, maybe there’s a learning curve and with experience I’d do better directing the water flow. Maybe someday I could come to like the Waterpik.

Crazy? I prefer to say, “Set in my ways.” With that said, I want to be a good role model for Jessie, so I must keep an open mind.

When Jessie doesn’t like the taste of a new food, her mom and I ask her to give it a second try. I should do the same with things Jessie asks me to try.  I’ll give my electric toothbrush and Waterpik another chance … someday.

Until my tooth stops hurting, though, I’m content with my manual toothbrush and clean mint floss taking food particles away. But whether I’m caring for my teeth the old-fashioned way or with the aid of new gadgets, one thing is certain ’tween daughter and dad, I love my girl and my girl loves me.

Until next month, remember to cherish the moments. Happy Halloween. After eating candy, brush your teeth well – with whatever toothbrush makes you happy.

PrevPreviousWhat to Do When Parenting Styles Clash
NextBreast Cancer: Risks, Symptoms, and New Revelations on Early DetectionNext
YOU MAY ALSO LIKE

Welcome to Houston Family Magazine! We are Houston’s Top Parenting Magazine. Our mission is to Educate, Entertain, and Empower all parents through excellence in editorial; we deliver essential information with enthusiasm and energy to engage with local parents for meaningful experiences. We invite you to join our family. Enjoy the November Issue!

Sam shares his own recipe of beautiful and delicious Autumnal pumpkin soup. His recipe calls for pumpkin and root vegetables for maximum flavor, but canned