Humanae and Genome Exhibits are Sociological and Scientific Eye Openers 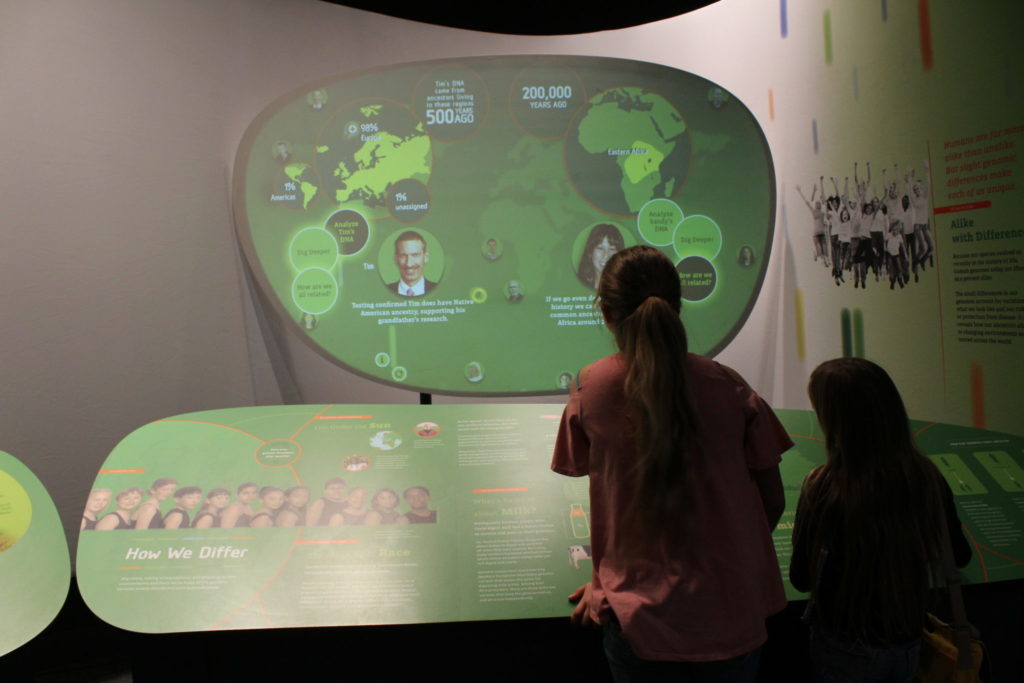 Two exhibits at the Health Museum work in perfect concert to expose the root of what makes us who we are, and there’s never been a better time to learn.

I took my daughters to the Health Museum yesterday to see a preview of the Genome exhibit, which opens today, Friday, June 9, 2017, and continues until September 11, 2017.   We were given a tour by Andrea Stromeyer, a Science Educator at the Health Museum, for which I am deeply grateful. Andrea pre-empted our Genome tour with a tour of Humanae, an exhibit that continues to September 5, 2017. She explained that Humanae dovetails into Genome, and she was exactly right. 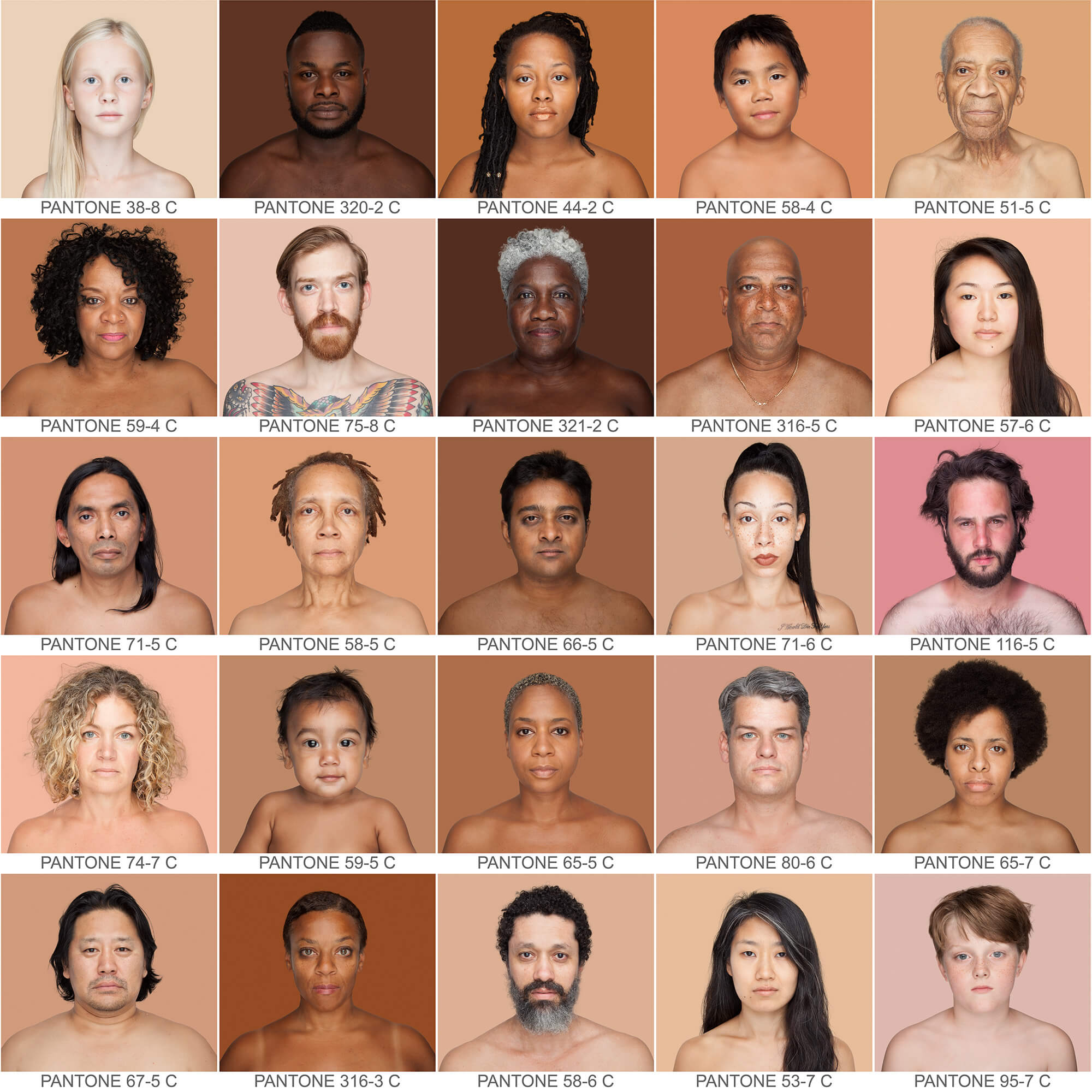 Humanae is a “work in progress” by the Brazilian artist Angélica Dass that challenges visitors to rethink how they see race and think about skin color through a chromatic inventory of the different human skin tones that label human subjects with their corresponding color in the industrial palette, Pantone.  Dass photographed random people in at least 13 different countries to create this display.

“The idea is to change how people judge one another. The words we use to describe each other — black, red, yellow, white — these are so untrue,” said Angélica Dass, Brazilian artist and curator of Humanae in a statement for the exhibit. “Let’s destroy this with an exhibit that shows that the true color of people is our humanity. Our oneness.”

The exhibit succeeds in this objective. It comprises a gallery of boxes containing photos of human faces matched with their corresponding Pantone color. Boxes are thoughtfully presented to highlight important concepts. For example, adjacent photos portray four different people who come from dramatically different backgrounds and geographical locations, but whose skin tones have the same Pantone index.

Andrea explained the cause for this phenomenon.  Peoples who originated in the Sub-Sahara were exposed to a great deal of sun, and very little shade, so their bodies produced extra melanin (a dark brown to black pigment occurring in the hair, skin, and iris of the eye, and which is responsible for tanning of skin exposed to sunlight) as a protection from UV radiation. In different environments, like Northern Europe, with little sun and lots of shade, a population’s people developed a different melanin to make the needed Vitamin D from very little sun.  The result is a fair or pale skin, lighter hair and eyes, and so on.

The exhibit features many open or empty boxes.  They are empty because the collection of photos and Pantones is ongoing, and the boxes will be eventually filled. Additionally, Andrea points out that the empty boxes suggest that some day, armed with the knowledge conveyed in this exhibit, we will effectively smash the boxes we tend to put people in based on their skin tone. 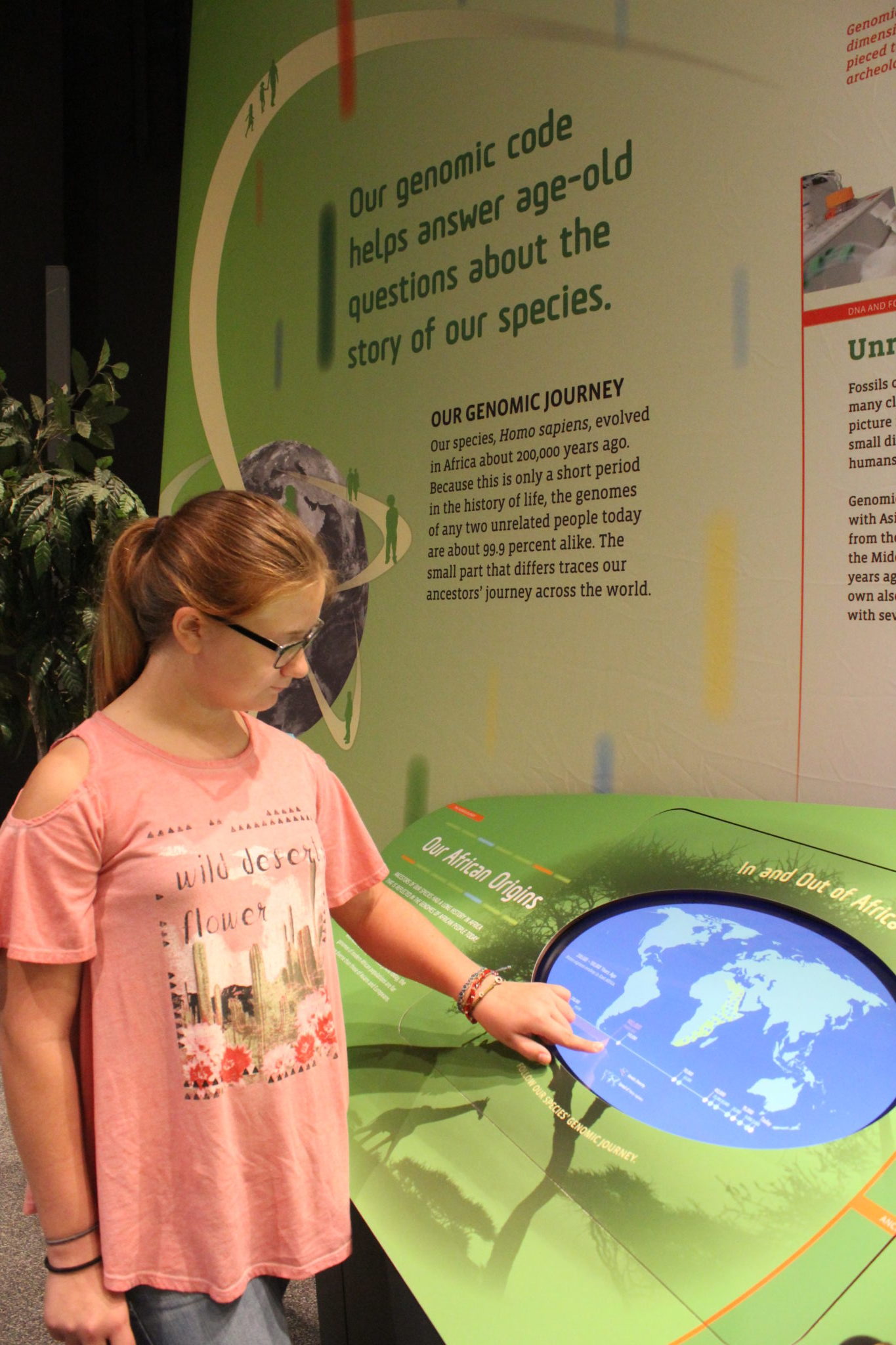 Andrea then walked us over to the Genome, an exhibit that endeavors to “unlock life’s code.”  The exhibit picks up where Humanae leaves off, a serendipitous circumstance, as the two events are unrelated in terms of origin (A genome is the complete set of genetic information in an organism. It provides all of the information required by an organism to function).

The first display we studied allowed us to move a sliding time scale from left to right. As we did so, a map of the world would light up with population densities of humans as they appeared in various parts of the world, all originating from Eastern Africa. Andrea reminded us of what we learned in Humanae and pointed out the rare-gem epiphany to be had here: “When people discriminate based on skin tone, they are discriminating based on how much sun a person’s ancestor’s received.”  Mind blown. 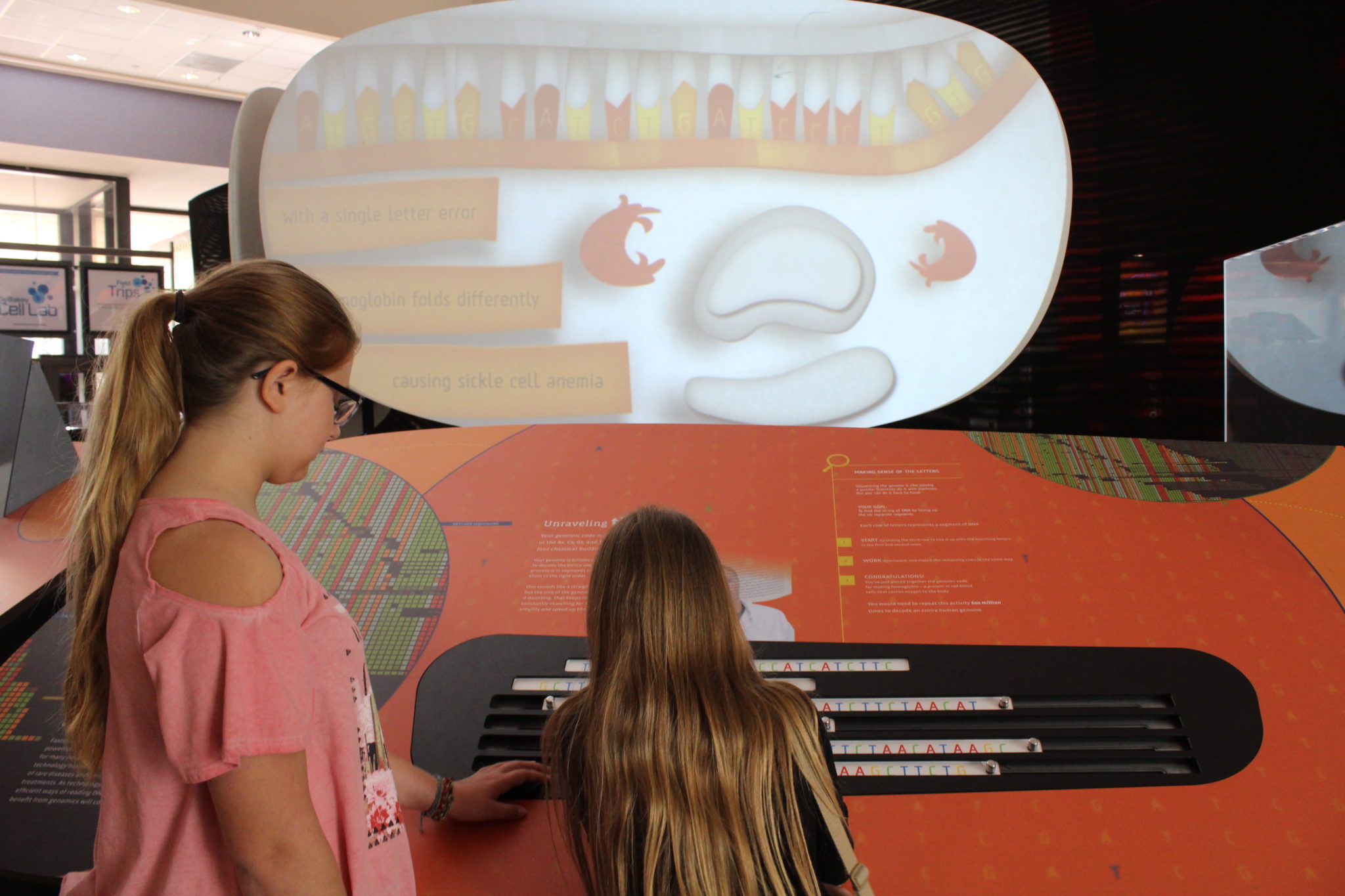 The remaining Genome displays were equally illuminating and fascinating. We were presented with relative scales of various genome, in comparison with the human genome. The size or complexity of the life form had little to do with the size of its genome. The Paris Japonica flower, Andrea explained, is 50 times larger than the human genome, due to the human genome’s super efficient ability to have one gene manifest more than one (this is known as pleiotropy, if you want to throw that $10 word around at your next cocktail party).

Other displays let us experience bird songs as genetic traits that are passed down; conveyed how genome study is helping us battle disease, even cancer; a timeline of genome study; and the future of genome research.  I found this last topic particularly interesting.  Andrea told us that it used to take years to sequence a genome. Now it takes only a couple of days.

“There are whole institutes dedicated to this effort,” Andrea explained. “All a doctor has to do is call one of them up and ask to have a genome sequenced, and it’s done.”

The exhibit also drove home a though-provoking personal challenge: To what extent should children be exposed to knowledge of their own genetics? For example, if your teen were passionate about pursuing a career as a concert pianist, but you discovered she was likely to contract a form of arthritis that would abruptly end her career, would you encourage her to pursue another profession?  A Genome display presents this and other “what if” scenarios. You, as a parent, answer “yes” or “no,” and you are prompted with possible outcomes of your decision. Fascinating. 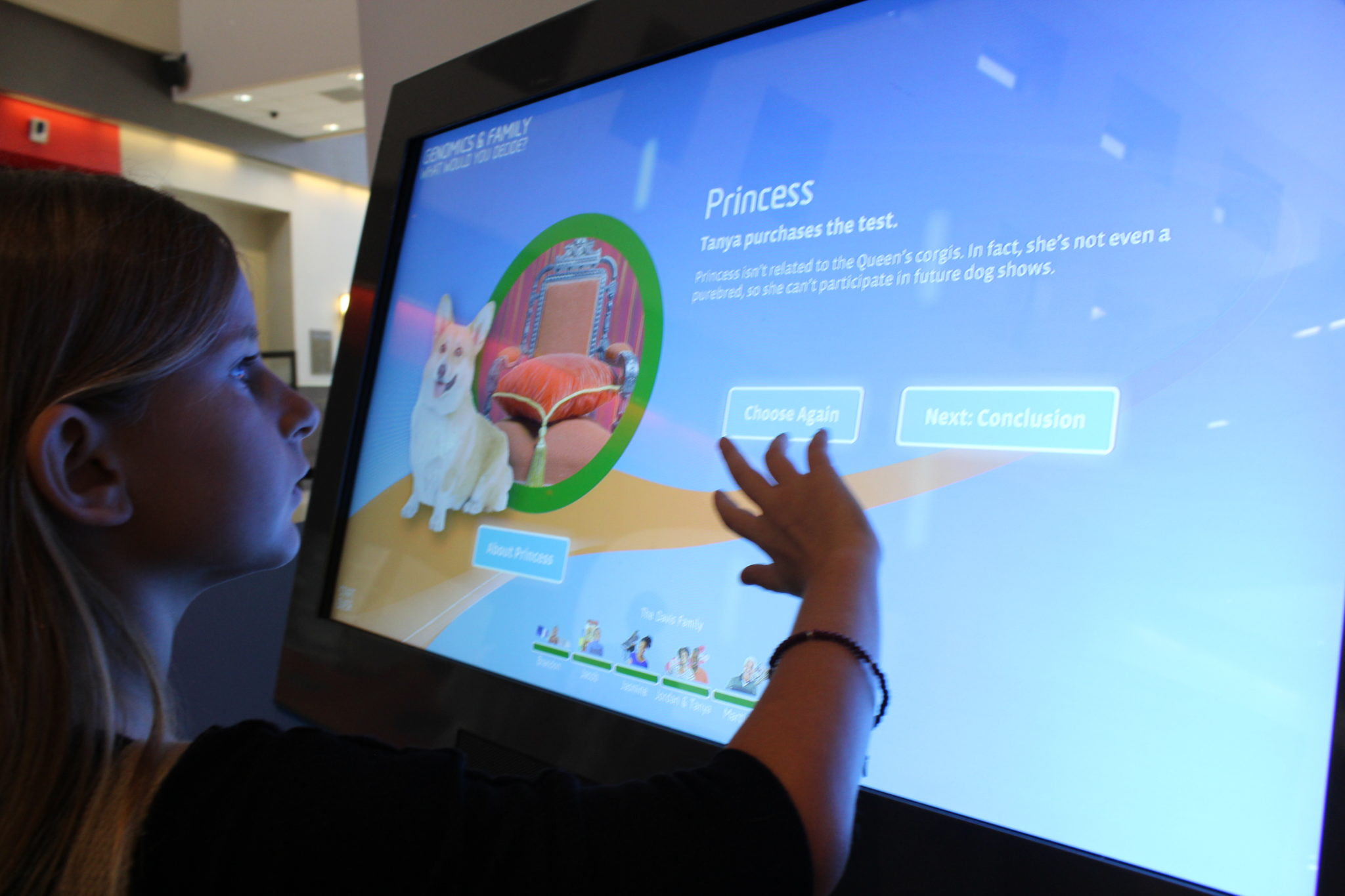 The Genome exhibit is a gift of unlimited learning in that it opens doors of curiosity and longing to know more.

Paired with the Humane exhibit, it offers the bonus gift of deeper, sociological understanding–the kind that tunes you into just how literally united we are as a species.

You will do yourself a big favor to catch the two exhibits while they are both showing at the Houston Health Museum.

PrevPreviousLearn to Make Movies at Joy Kids Studio!
NextMaking the Most of Your Space:Next
YOU MAY ALSO LIKE