Family Travel Helped Our Kids Make Their Own Memories, Not Simply Step into Ours 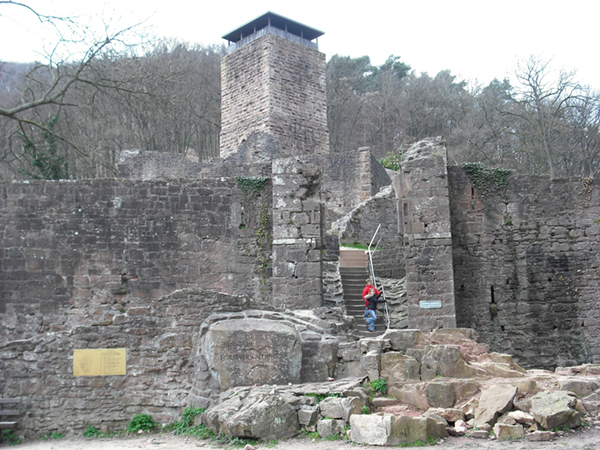 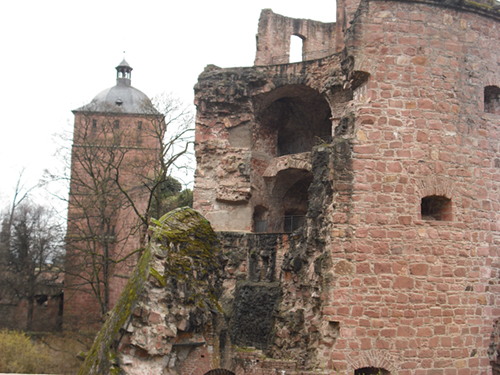 We lived in Germany as a young expat couple and a decade later traveled back to show our daughter and her seven-year-old brother our favorite haunts. I thought it promised to be a sweet walk down memory-lane, where our kids would enjoy stepping squarely into the footprints my husband and I had left years ago.

Instead, they insisted on pulling us in new directions, almost as if they, first-timers in Germany, were the tour-guides. A huge dancing mess of little prints resulted, sprinkled wildly around our larger ones. I should have known the kids would insist on making their own footprints, creating original memories driven by them.

They transformed our time in Germany into a nonstop quest to conquer towers.

Any signage with Schloss (castle), Feste (stronghold), or Burg (fortress) sent our car careening in that direction as if driven by the giggling youth in the backseat. Without exception, we would climb to the upmost height of the ruin, up the cramped, damp, spiral stairs to the lookout tower.

These ruins–unlike American historic sites—lacked the warning signs, the guardrails, the attendants and the guides. There were no disclaimers posted, no emergency phones available if help were needed, no brochure map to navigate the castle ruin’s maze. Kids sprinting from dungeon to teetering tower were solely under the protection of their parents. 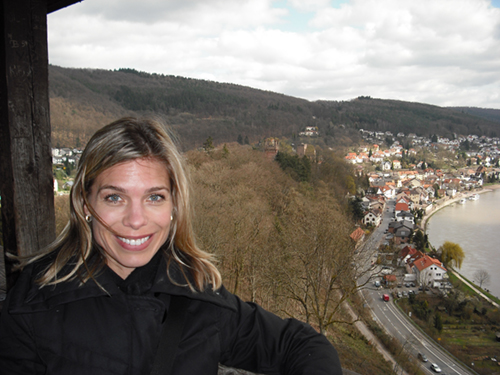 We kept a close eye on ours and were frequently winded in the process. Hide-and-go-seek was a challenge I’d rather not repeat. Without exception, the children would beat my husband and me to the top, where in their imagination they would declare the takeover complete.

On a visit to an old castle, circa 1120, now a ruin one can freely explore, I could see that my fear of heights was going to be sorely challenged. Figuratively, though, the kids were holding my hands.

In chasing after them, I would forget to be afraid. They were coaxing me not to succumb to the bubbling anxiety I felt over the great distance that lay between the earth and me. Their free spirits begged me not to worry about someone getting hurt, but instead to catch a glimmer of their joy in the moment.

So, I followed. I focused on putting one foot squarely in front of the other. One step at a time. I joined them at the top to enjoy the fruitful rewards of a breathtaking landscape only visible to those willing to take the necessary risks.

Looking out and away, I found a new appreciation for the pastoral German landscape. But the kids didn’t allow for interminable gazing. One step at a time, I scrambled back down to earth after them.

And so it was. One step at a time, one tower at a time.

We visited the famous university city of Heidelberg along the Neckar River, complete with a picturesque castle perched on the hills above. The guided tour through the historic castle was the only official tour we took the entire trip. But it wasn’t an epic moment for the kids. They weren’t impressed. The clean, orderly tour cramped their style, restraining their ambitions to rout out the invisible enemy. The renowned castle paid dearly for it—the kids gave the castle an embarrassingly low rating in their private evaluations. What was least rewarding for the kids was proportionately costly for the parents.

Thanks to the kids, a more muscular picture of Germany developed, a place I thought I knew. My husband and I fit the paradigm of the older generation learning from the younger. Children, after all, are synonymous with the unexpected. As this trip to Germany crystallized, with kids in our life, surprises arrived daily, challenging us to stay flexible, practice humility, and most of all, to laugh.

Originally published by Great Moments in Parenting. Kathryn Streeter’s work has appeared in publications including The Washington Post, The Week and Paste Magazine. Find her on Twitter, @streeterkathryn.

Traveling internationally with your family, as writer Kathryn Streeter talked about in her article “Family travel helped our kids make their own memories, not simply step into ours”, is a lot more affordable and convenient than most Houstonians might think.

In fact, SWA is credited with revitalizing Houston Hobby (HOU) airport in the 1970’s and almost half a century later, still going strong by launching it’s international service. Today, Hobby serves more international airports than any other Southwest city.

“We were pleased to launch our international service from Houston Hobby, and in October 2015 we opened a new concourse focused on international service,” Green explained to Houston Family Magazine. He tells us Southwest will launch Saturday-only service to Grand Cayman in June which totals 18 flights between Houston and 10 international destinations.

Green says family is and always has been a core value of SWA. “We each live our purpose daily and that’s to connect folks to what’s important in their lives through friendly, reliable and low-cost air travel. Each of those three elements is important to families,” said Green. “Houston will continue to be a heartbeat for Southwest Airlines.”

PrevPreviousSandestin: The Jewel of Florida’s Emerald Coast
NextMoving Beyond Mommy Burnout: 20 Ways to Recharge in Only 20 MinutesNext
YOU MAY ALSO LIKE