How to Organize a Simple 4th of July Parade 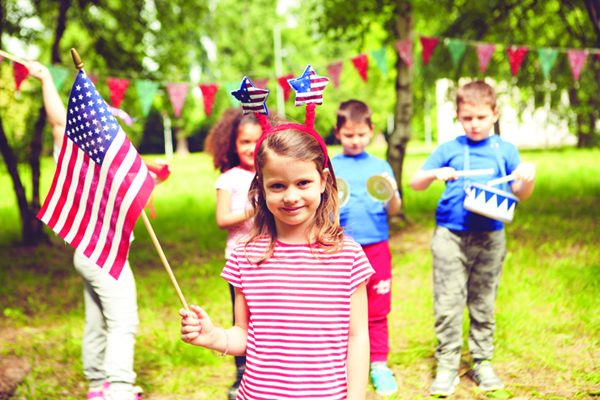 How to Organize a Simple, Fun, Fourth of July Parade

Whether you’re organizing a neighborhood-wide Fourth of July parade or involving just a few friends, this step-by-step guide will help you get started.

You can go big or small with your parade. Either way, you’ll need to designate the route before you do anything else. Smaller parades can march the length of the driveway, across someone’s yard, or down a stretch of sidewalk. Any of these venues will work for kiddos’ marching with instruments and flags, etc. If you’d like to go larger, and include bikes, trucks, and floats, it’s possible you will need to obtain permission from your city council to block off a street. Determine how you will mark the start and end points of your parade. It’s also a good idea at this stage of the planning to devise a “rainy day” alternative. Garages or a series of pop-up tents down the stretch of sidewalk should do nicely. For bigger events, check with the proprietor of a local gym, perhaps the local YMCA, to see if they’d be willing to let you use their space in the event of rainy weather.

You need two things for a parade: participants and spectators. Distribute flyers to your neighbors encouraging them to join in the fun. Hyperlocal social media sites like Nextdoor are another good way to promote your larger event to a wider audience. Make sure you outline the parade route in your flyer, so onlookers will know where to set up their lawn chairs. Encourage them to spread the word to their friends who might not live in the neighborhood. Suggest that folks dress in their most festive, patriotic attire. As people start lining up along the route, enlist some of the kids to pass out tiny flags or hats.

Cut off 6-10 feet of red, white, or blue butcher paper and spread it out on the floor. You can pick up poster paint markers, glitter glue, and other spangly decorations at most dollar stores. Have the family brainstorm to come up with a name for your parade. Write it boldly across the banner, then have fun decorating. It’s an exciting way to visually announce the parade’s arrival to spectators. If the banner turns out nice enough, you can roll it up and save it for next year’s event.

What follows the parade banner? Why, a marching band, of course! Enlist some of the neighborhood kids to play some instruments, either for real or pretend. You just might be able to coax older kids who play in the school band to play a patriotic tune. On the other hand, you could just outfit the smaller kids with makeshift drums, tambourines, and guitars (the oatmeal box, cereal box, jingle bells and rubber-band variety) or kazoos, and it would be just as fun. Or do both–most parades have more than one marching band, right? If you opt with a strictly pretend band, consider having one of the kids pull a wagon with a boombox playing patriotic music, so the kiddos can feel like a real marching band. Are some of the neighborhood kids involved in cheer? Invite them to march along with the band for some extra adorable pep. The spectators will love it.

Invite the neighborhood kids to dress up their bikes and scooters. Maybe they can decorate some play wagons to make floats and pull them with their bikes. Encourage the children to dress up in costume and wave to the spectators. And don’t forget Fido! Tie bandanas around pets’ necks, and have their owners walk them along the parade route. If you’re going all out with a larger parade, you can invite neighbors to put together floats using their trucks and flatbeds (we’re in Houston, so at least one person on the block is equipped). Alternatively, get together to make one, final showstopper float. Decorate the flat bed with crepe flowers, flags, and streamers. Add some hay bales for some noteworthy locals–perhaps a soldier who’s returned home–to sit on and throw out candy as they wave to the spectators.

Wherever the parade ends, consider setting up a small table with some lemonade and cookies or other treats. A friendly red-and-white checkered tablecloth with some balloons will set the stage nicely and will serve as a sweet thank-you to all who participated. For an even bigger thank you, you can host a barbecue or potluck at your house. If you go this route, be sure to include it in your flyers and evites so you can ask people to chip in with sides and desserts (see sidebar for helpful tips on hosting a post-parade party).

It’s the Fourth of July–a time for celebration, tradition, family, and friends. So don’t sweat the small stuff. Once the day arrives, enjoy the fun, however it turns out.

After your parade, invite everyone over for a patriotic celebration, complete with good ol’ grilling, games, and gab. Here are some tips we’ve come up with to make the day extra fun: